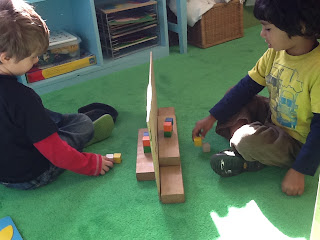 We set up a game in the classroom for the children to play in pairs in order to foster their spatial awareness and use of their words in their vocabulary.

We put big, flat boards held up vertically by support blocks on the rug with a tray of colored wooden blocks.  There are two of each color block. 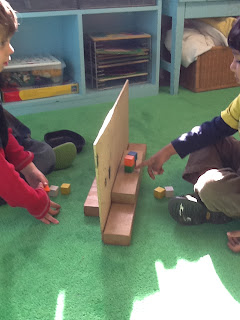 One child gives the directions while the other child follows them. 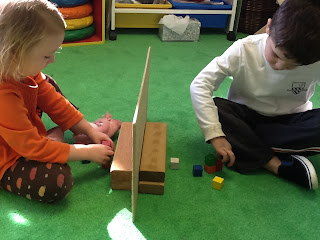 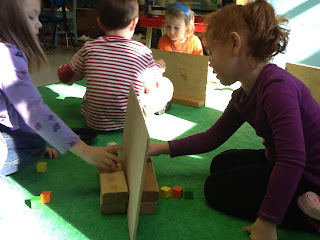 There are eight blocks for each set. 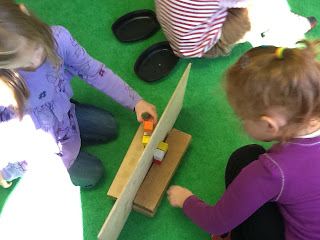 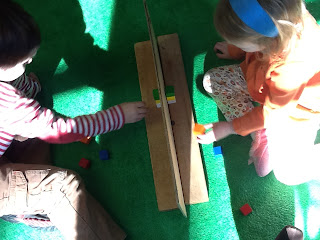 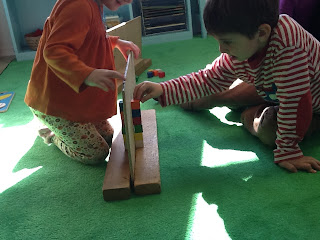 When they are finished, they lift the partition and see how similar the buildings look. 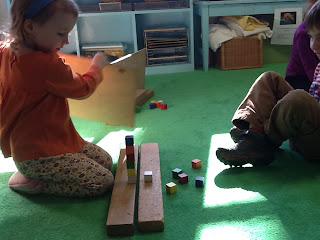 This pair learned the hard way, that maybe they should build a bit away from the screen.  But they didn't give up.  They moved on to the other child giving directions. 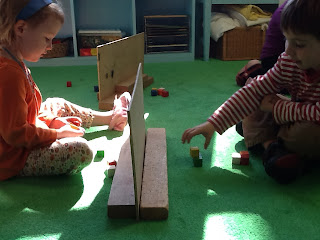 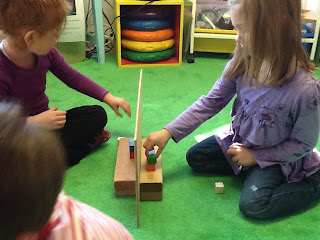 We did this in small groups and then the materials were left out for children to use on their own.  The pictures above were taken on the day that they could use these items as a choice and it was very popular.

This would be a fun game to play with your child at home as well.  You can always use the top of a board game propped up as a partition.  If you do not have blocks handy, you can use buttons or bottle caps or any small toys of which have two each. When it is your turn to give directions use spatial terms such as behind, in front of, next to, on top of, under, on the left, on the right, and so on.
Have fun playing!

Speaker, Trainer, Coach, Consultant, Educational Director, Teacher. I received my Bachelors degree from Boston University in Early Childhood Education under the tutelage of renowned expert Judith Schikedanz. While teaching Kindergarten in Greenwich, CT I received my Masters in Curriculum and Teaching from Columbia Teachers College and had the opportunity to train several summers with Lucy Calkins and the Writing Project. Upon leaving public school teaching, I focused on providing training to early childhood centers. In 2000 I discovered an amazing preschool for my children, CCNS. I am currently the Educational Director and Fours Teacher. In 2008 I learned about The Project Approach as an incredible method of delivering curriculum. I have trained with Lillian Katz, Sylvia Chard and Judy Harris Helm and am now a Nationally Certified Young Investigators Trainer and Coach. One of my projects is featured in Judy Harris Helm's book, Becoming Young Thinkers: Deep Project Work in the Classroom. I love what I do, I enjoy sharing it with others and I hope to hear and learn from the many amazing educators that are out there. 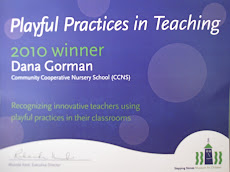